Theater in the time of COVID-19

Despite longing for a return to the stage, this seasoned thespian and the rest of the theater community are counting on their dedication to the craft to survive the indefinite waiting period before theaters open doors again.

By MENCHU  LAUCHENGCO-YULO
Copied to Clipboard

By all accounts, November 2019 was going smoothly.

Creatives were in place: we put together a wonderful cast and most importantly, we had found our Annie. In fact, there were three of them — Gab Pangilinan, Ana Luna, and Nicole Omillio. Bongga Ka ‘Day, the next big musical offering from Resorts World Manila, in cooperation with Full House Theater and Frontrow, had already started developing while workshops were slated to late March 2020. Scriptwriter Liza Magtoto and director Maribel Legarda, together with myself and co-artistic director Michael Williams, were finalizing the script.

Meanwhile, rehearsals for The Band’s Visit began in late January. Bobby Garcia assembled an amazing cast for the show. Alongside Atlantis regulars, Rody Vera, Reb Atadero, Leanne Mamonong, and Floyd Tena were to make their Atlantis debut. The Band’s Visit tells the story of an Egyptian police band arriving in Israel to play in a concert. After a mix-up at the border due to a language barrier, they are sent to a remote village in the middle of the desert. With no bus until morning and no hotels in sight, these unlikely travelers are taken in by generous locals.

The material was all about moments that get lost in translation, and we had to learn dialogue in Hebrew or Arabic. It was a challenge, but one that every member of the cast embraced. Rehearsals were in full swing when, in late January, alarming videos from Wuhan had started circulating. Bobby, director of the show, had taken the necessary steps for safety protocol. No more beso-beso and alcohol stations were set up in every corner of the rehearsal hall. None of us could have ever imagined the breadth and scale of the incoming pandemic. That couldn’t possibly happen here.

“ The performing arts had been devastated by the pandemic. Our work is based on and necessitates human interaction. Our work is high-risk. So many artists were out of work suddenly, but we had to rise above it and not waver in our support of others. ”

On March 9, we had begun technical rehearsals for The Band’s Visit. The cast was in high spirits. We had gotten very close and were eager to share the show’s poignant and timely message — one of love and respect for all humanity regardless of race.

We felt very safe in our little world, but around us, things were spiraling out of control. The virus had reached the Philippines. Under Bobby’s guidance, we would continue to work until told otherwise, keeping our scheduled opening date of March 13. By March 11, we were told that RCBC would not allow us to proceed with our premiere. Total lockdown had been declared by the government, going into effect March 15, thus overtaking our entire opening weekend. We were stunned, we cried, it all felt like a bad dream.

The silver lining was that our press preview on March 12 was allowed to proceed as planned, and thus we were given one chance to perform, with social distancing applied, before a select group of people.

But just when I thought matters couldn't get worse, I got a phone call from my sister at around 6 p.m. in March, saying my father was being rushed to the hospital. He was later pronounced dead on arrival from a heart attack. As I sat in my dressing room, absorbing the news I had just heard, I didn't know what to feel. I was numb. So many thoughts raced through my mind. I couldn't leave! I had a show at 8 p.m., so I didn’t tell anyone what had just happened. I knew I had to hold it together to survive the show, and the last thing I needed was sympathy from the cast. I couldn’t afford to fall apart. In the end, only Bobby knew, he was my rock.

Right before I stepped on stage, I took a deep breath, said a prayer, and dedicated my performance to my father. None of my family had been able to come and watch because they were all at the hospital. Only my son was in the audience, and he was still unaware of what had happened. After the show, we rushed to meet my mother and sister at Manila Memorial. Bobby also informed the cast about my father's passing and they showed so much love and support.

My father was cremated on what would have been the opening night of The Band’s Visit. Because this was done before the lockdown, we were all allowed to be present for the cremation, though we could not give him a proper wake or Mass. To this day, we have not been able to bury him. His ashes remain with my sister and we plan to bury him once we can do it properly, with the commemoration he deserves.

By April, it was becoming clear that no shows were possible this year. Bongga Ka ‘Day, which was scheduled to open at the end of June, was postponed to next year. The performing arts had been devastated by the pandemic. Our work is based on and necessitates human interaction. Our work is high-risk. So many artists were out of work suddenly, but we had to rise above it and not waver in our support of others.

“ I believe artists are resilient. We will survive and use our passion and artistry to find light in the darkest of places. ”

Artists started to pull together. Bayanihan Musikahan, the brainchild of Maestro Ryan Cayabyab and Trina Belamide, was one of the first fundraising projects I participated in, alongside my brother Raymond, to support displaced artists. Many participated, giving their time for free to raise money. Then Philstage, an organization of leading theater companies in the Philippines, which I am a part of, also did a round of fundraisers for displaced artists.

Lately, my co-artistic director Michael Williams and I have been working on The L.O.V.E Project, the brainchild of our CEO and president at Resorts World Manila, Kingson Sian. The L.O.V.E Project, which stands for Live On-request Virtual Entertainment, allows people to hire an artist via Zoom to perform for them. This way, performers can make money without ever leaving the safety of their homes.

“ I long for the day that I can set foot on a stage, unafraid to perform in front of a gathered audience. Nothing beats the energy and atmosphere of a live performance. But for now, I will rely on my dedication to the craft and trust that my spirit will see me through. ”

I believe artists are resilient. We will survive and use our passion and artistry to find light in the darkest of places. For now, we need to make sense of this “new normal” and keep our hopes alive. We will find a way. We always do.

I long for the day that I can set foot on a stage, unafraid to perform in front of a gathered audience. Nothing beats the energy and atmosphere of a live performance. But for now, I will rely on my dedication to the craft and trust that my spirit will see me through. Our love for this art form is something that can never be taken away from us, and when the world is safe and the theaters open, we will be there to share it with you. 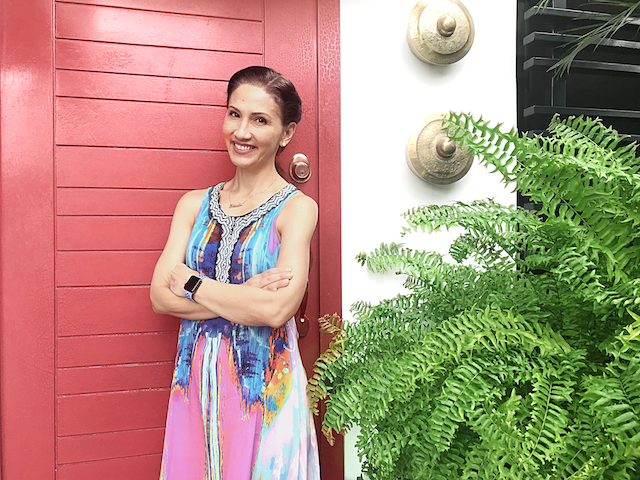 Menchu Lauchengco-Yulo is a theater actress and director, who started her career in 1978 with the Repertory Philippines. She has over a hundred plays and musicals under her belt with Diana in Next to Normal, Mrs. Lovett in Sweeney Todd, Nora in A Doll’s House Part 2, and Eva Perón in Evita as some of her most memorable portrayals. She is currently the Full House Theater’s co-artistic director.