Carrier of the virus I am not

An OFW in Rome beats all the odds just to make sure she and her young daughter will survive the pandemic. She lost her job and found it again — in between she lined up for relief goods with the beggars in Italy and was bullied when locals thought she was a carrier of the deadly virus.

I am a domestic helper in Italy. I have been cleaning toilet bowls, so to speak, in Rome for 16 years now. I do my job with pride and dignity.

I love to read. I credit that hobby for my moderate language facility. Despite my degree in Computer Science, I found it necessary to work abroad to support my family. My parents were sickly and, being the eldest, I had to help provide for my nine younger siblings.

I am now 36 years old. I work day and night not only to earn money but also to forget about being homesick.

Everything was going alright with me in Rome. Until the pandemic caused by coronavirus disease 2019 (COVID-19) brought me to my knees — in prayer, in almost poverty.

When the pandemic struck worldwide, Italy was one of the countries with the highest number of confirmed cases and deaths. In a short period of time, the virus exploded in all parts of the country and reached the Eternal City (where I live).

“ Can I live without a job? How can we continue living in a foreign country and yet not a citizen of it? How else are we going to eat? ”

Hundreds of people died every day (especially the elderly) and thousands had been infected. When Italy reached its peak, our Prime Minister ordered to close all borders to prevent the increasing threat of the deadly virus. No more tourists, no more crowds, no more parties. As if we had gone back to the ancient period. No school, parks, shops and worse, no more work.

This was a very difficult situation as I was raising my nine-year-old daughter Angel. I was saddened about how to continue living the life we ​​used to have. I felt weak and started to think about negative things that would happen next.

I was suspended from work. Tough luck. The thought of how to feed Angel was getting real, becoming frightening and reducing me to tears. I felt hopeless. All of a sudden, I worried about how to pay my bills. I was nervous that many times I felt like I would just collapse. My goals would fail. I was starting to fail.

The lockdown in Rome was a sad, frightening scene. Sadness was not new to me. But I was a fighter. The virus made me sad and frightened. There were checkpoints everywhere. I didn’t think I could find a way to earn extra.

I was away from my family. That hurt a lot. But I knew I would survive. It was difficult to live in uncertainty as to whether you were still safe without security.

These were the questions in my mind: Can I live without a job? How can we continue living in a foreign country and yet not a citizen of it? How else are we going to eat?

“ Italian teenagers threatened me on the train, shouting “Virus carrier! Virus carrier!” They did not harm me physically but their words hurt me. ”

Most Filipinos here were suspended from work. Many lost their jobs. People were scared and got out of control. They became selfish. They were also worried about losing food at the worst possible time because the government was in chaos and was not ready for an instantaneous pandemic outbreak.

Living abroad is not easy. It’s not like what people think that we OFWs are having the best life. You should be brave enough to face life alone. There is no help in the event of a disaster. If you get sick, you take care of yourself.

To aggravate the situation, the Filipinos were being bullied by the Italians thinking that we were Chinese who brought the virus to their country. And I was one of those who experienced bullying. Italian teenagers threatened me on the train, shouting “Virus carrier! Virus carrier!” They did not harm me physically but their words hurt me.

According to reports, the virus started spreading because a careless resident from Lombardia in Northern Italy met a foreigner from China (where COVID-19 started). At that very moment, Italy implemented the rule that those suspected of having the symptoms of the virus should stay home. Any person who had been in contact with a confirmed COVID-19 patient had to be isolated. But that person didn’t care; in fact, according to reports, he continued to socialize with his colleagues, friends and relatives and BOOM! The nightmare began. March 10, 2020, Italy declared its lockdown.

We had no choice but to stay home. Security across the country was tightened. It began with the closure of public and private schools, followed by different government agencies, offices, shops, and restaurants. Hospitals accepted emergency cases only.

For the first two weeks, my daughter and I were still okay; we still had a budget for food. But that situation got worse because I only had meager savings and I didn't have any resources. I felt scared every time I would feel I had the symptoms and I had difficulty contacting the doctor because there was already an excess of patients in the hospital. No choice, I would go out to buy my medicine.

When there was still no help from the Italian government, I was forced to look for a way to make a living despite the threat of the deadly virus. Fortunately, after a month, we heard of churches providing relief goods so I did not hesitate to go despite the long queue. I fell in line with the homeless people and the beggars of Rome. I had no problem with that. I was just glad to find help.

One month after the lockdown, I decided to go back to work even though it was dangerous because the only way to get there every single day was through the chaotic subway. But the thing that worried me the most was that my employers were hospital frontliners so it was difficult for them to avoid COVID-19. But I needed the job to keep me going. I made all the sacrifices to avoid being infected.

I didn't expect the next thing to happen. My employers made me feel like I was the one who would transmit the virus to their family. Their actions really hurt me. I was scolded for a slight mistake. That prompted me to defend myself in fluent Italian. They were rude to me but even that I tried to understand by explaining to myself that, perhaps, they had a hard time in the hospital.

One day, even if I knew it would be hard to find a job amidst the pandemic, I informed them that I wanted to render my resignation due to overwork and heavy responsibilities. They refused my resignation and had since treated me better. God is good.

The Philippine Embassy in Rome was paralyzed and could not help because of the worsening situation. The embassy officials came up with proposals to provide financial assistance to Filipinos who lost their jobs, but to date, my application has not come to fruition. The Filipino community in Rome could not move either. There were some Italian associations with some Filipino volunteers who sent their help to deliver relief goods to select families but due to a large number of needy people, they were unable to cover everything.

In the second month of the extended lockdown, more cases had been confirmed and the death rate was rising. I could do nothing but pray earnestly until the unexpected help arrived. The government gave each of us vouchers worth 500 euros to buy food at accredited supermarkets.

I was so grateful Angel could finally buy a jar of Nutella again. On the contrary, the lockdown made me and my daughter much closer. I spent a lot of time with her. Helping her with her homework made her happier.

At the height of the pandemic in Italy, what I feared most was that one day I would also get sick. I worried about Angel. I feared not being able to help my family anymore. I was afraid that one day I would never be with them again. Thank God for technology, my family in the Philippines and I just encouraged each other to go on with life.

The pandemic has strengthened my faith. It has changed the way I think and live and has developed me as a better person. I just remind myself that when there is life, there is hope. Above all, I thank the Lord that I am safe and healthy to continue my mission for Angel, for my humble family. 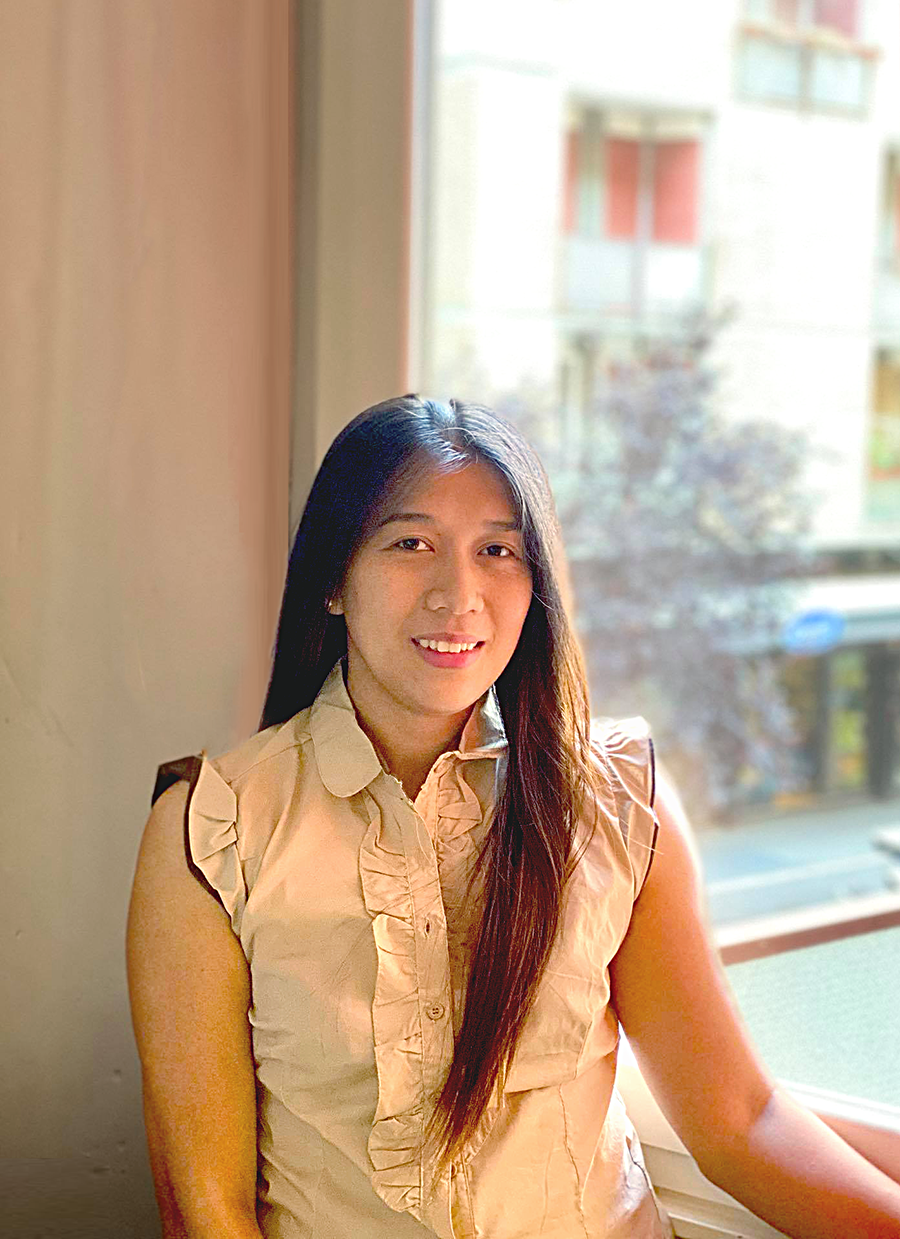 Arlene Lapinid Alviar’s biggest accomplishment in life is being able to help her family. She takes pride in being a domestic helper in Italy because the hardship she experiences brings comfort to her loved ones. She has since brought two of her siblings to Italy to work as domestic helpers, too.