It’s still lights out and curtains down for theater, but in no way does this mean it’s dying. Theater has a long record of resilience, but for the show to go on, he calls for its transformation to a more dynamic and relevant industry and art form.

By BOBBY GARCIA
Copied to Clipboard

VANCOUVER, Canada — Even at its finest hour, theater has always been a volatile and temperamental art form. Perhaps, there also lies its magic. But as unpredictable as it can be, there was no preparing any of us for the literal showstopper that was, and continues to be, COVID-19.

Atlantis Theatrical Entertainment Group, along with a handful of other theater companies, felt the effects firsthand. Atlantis had just celebrated an amazing 20th anniversary season, and we were hard at work on our first musical for our 21st season when the whole world fell apart.

The Tony Award-winning musical The Band’s Visit was scheduled to open on a Friday, March 13. Despite hearing the rumblings of a potential country-wide lockdown, there was still no official confirmation, so the production was set to raise its curtains to a small, socially-distanced group of friends and family. We were excited to share our hard work and the show’s beautiful message with our audience, the final element of all theatrical productions. But that was not to be.

The official lockdown guidelines were announced in the afternoon of our opening night and mass gatherings would have to come to an end immediately. Since we were already gathered at the theater, we instead spent the time saying our goodbyes and thank yous to a company of extremely dedicated artists and theater practitioners. It was one of the most difficult and painful days of my career. I could feel their disappointment that all their hard work would never see an opening night and I could see the fear in their eyes from the uncertainty that lay ahead. The world was changing so rapidly around us and there was now an unfathomable pandemic claiming lives. We would have to take our intermission early. The theater would have to wait. Suddenly, an entire industry faced abrupt and indefinite unemployment. But we all knew it was vital that we played our part in addressing the pandemic.

And so began the quest for the still unanswered question as to how the theater industry could move forward. And, for myself, what was next for Atlantis, the company I founded over 20 years ago.

Earlier that week, with the ambiguity and confusion on how the virus was being transmitted, Atlantis had already cancelled its second show for the year, as the production involved a cast of close to 60 performers, half of whom were children. Not a good idea at all.

As travel bans and airport shutdowns loomed, I frantically packed my suitcase and was lucky enough to get on a flight back to Vancouver, where I live for most of the year. It was a tense flight with families trying to get home and a world dealing with a mysterious virus. It was also one of the quietest flights I have ever taken. Suddenly, anyone who even cleared their throat on the flight was suspect.

The heartbreak I felt from everything that transpired that week took a toll on me as lockdowns and quarantines became a global effort. I was in love with what we were creating and with the story we were hoping to tell. It was a joy to come into rehearsals for The Band’s Visit each day with a mind-bogglingly talented cast and production team led by the incomparable Menchu Lauchengco-Yulo and Rody Vera. And now into thin air, it all went. I was not prepared to be so close to the finish line, yet never get to it.

I spent days that turned into weeks that turned into months seeking comfort in books, music, and the voices that have always brought me peace and solace. Linda Rondstadt, The Beatles and Jack Johnson played nonstop on a loop in my room. Every new morning felt like Groundhog Day. But I had it easy. There were braver people out there who were confronting this virus head-on in hospitals and in the service industry. All I had to do was wash my hands, shelter in place and follow social-distancing protocols.

“ After all, we’ve been through, what stories really mattered? In this new confusing age, what is it that genuinely sparks my soul? ”

The state of emergency gave me an opportunity to connect with people in ways that I hadn’t found time for in the past. We told stories, shared memories, counted our blessings, gave thanks and dreamed of the perfect future together, but very far apart. This made me realize a universal truth — storytelling is essential to humanity, especially in difficult times. And that is theater’s potent life force. 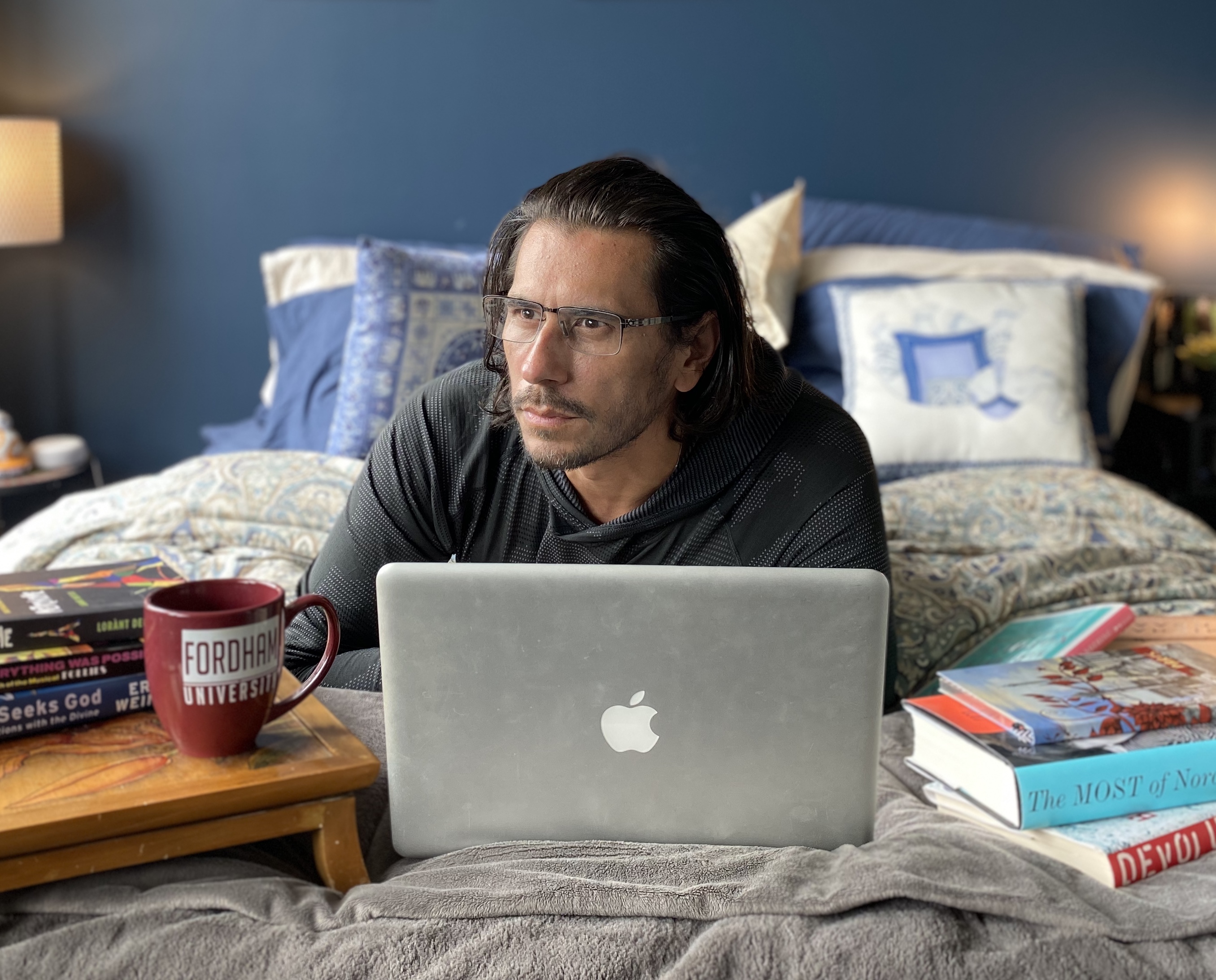 The lockdown also allowed me to connect with arts practitioners around the world for discussions about what the future might have in store for us all. And so, fueled by information that changed on an hourly basis, Atlantis made the decision to ride the wave rather than swim against it. Given how fast the world was spinning, it would be impossible for the company to make definite plans. Any goal would be purely aspirational. It is a sentiment that is shared by many theater companies across the globe, I believe.

This sudden, unscheduled intermission has also allowed me to personally contemplate what it is I want to do moving forward and to reconsider the stories I feel compelled to tell. After all, we’ve been through, what stories really mattered? In this new confusing age, what is it that genuinely sparks my soul? I don’t have any answers yet — and that’s okay. There is still so much that continues to be unknown. We are at a time where what is important is that we ask the questions. The answers will come in due course.

“ For now, it is imperative that we transform. We must learn new ways to tell stories that incorporate the essence of theater. We owe that to our theatrical ancestors. ”

But in no way does the unpredictability mean that theater is dying. Theater has survived many plagues in the past. Shakespeare himself survived two. Theater is stubborn. It is persistent. It is essential. The Nobel Prize-winning author John Steinbeck once said, “The theater is the only institution in the world which has been dying for four thousand years and has never succumbed. It requires tough and devoted people to keep it alive.” And the Philippines has that. We have a community of incredibly passionate, inventive, durable, industrious and resilient theater professionals who will keep theater alive and thriving and will take it to a new epoch. I suspect this hiatus will usher in a new generation of talent with innovative ideas who will become the future trailblazers of our industry.

Will things be the same? No, probably not. Nothing ever is after devastation and loss. This will definitely be a test of our ability to reconstruct and revolutionize theater into an even more dynamic and relevant art form and industry. But true transformation and transcendence can only happen with great struggle. And that is the period we are in.

For now, it is imperative that we transform. We must learn new ways to tell stories that incorporate the essence of theater. We owe that to our theatrical ancestors. We experiment with Zoom, streaming, YouTube and podcasts. Terms and technologies we never associated with theater in the past but that we now turn to in our efforts to keep storytelling alive. It may not be the classical theater-going experience yet, but that will return in time.

This will have to do for now. The evolution of our industry through this pandemic will ebb and flow. There will be days that feel victorious and days that feel like the struggle is insurmountable. But despite the bruises from battle, Theater, because of its irrepressible spirit, will be back stronger than ever, make no mistake about it.

Theatrical director and producer Bobby Garcia has directed over 50 theatrical productions in the last 25 years. He founded Atlantis Productions (now Atlantis Theatrical Entertainment Group), one of the country’s most prolific theater companies, in 1999. He will soon be launching a new creative endeavor called Sparkorama Collaborative Space.